It just so happened that i was in a planting mood yesterday. Had i not been, i wouldn't have noticed that our zinnia/snapdragon seeds have begun to sprout. 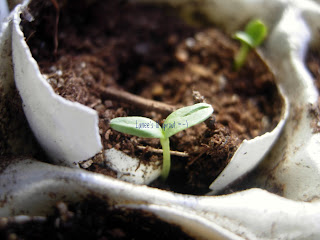 (this has got to be the cutest sprout ever!, lol)

I'm not sure which these are, because i planted both in each shell thinking that i had lost the zinnia seeds in the tumble the egg planters took to the floor.

We'll call it a surprise! They both grow to be about the same height, so there shouldn't be too much of an issue when they do reach their full bloom.

I'm thinking that their sudden appearance has something to do with the seed starter soil that i put on top.

it could be that it was just their time, but that's me, always looking for a miracle.

i finally got around to cutting up some of the paper towel and toilet paper rolls that i saved just to use as eco friendly planters.

Watermelon and Carrots went in this first batch, because they take the longest to grow. it's surprising how small a carrot seed is. having never planted carrots before, i hope that my sprinkling of a pinch of seeds per planter won't give me any issues later. I guess i should have looked it up before hand, but i figure, the things grow in bunches, right? so a bunch of seeds per thing should be ok =-|

I REALLY want to plant radishes cause i love them, but i think that they take the least amount of time to grow of all the seeds i have so i'll be a bit more patient. My garden dirt isn't quite ready yet and i don't want to have them fail just cause i put them in bad dirt.

How is your planting going?

I'm glad that the sprouts came up when they did- it's so inspiring to see them appear out of no where!