i attempted a bear

so, my friend joe's b-day was weeks ago and i wanted to send him a special gift. i'm broke so of course it would be something crocheted. i tell ya though, there aren't a lot of crochet patterns out there for men. i wouldn't know where to begin as far as male appreciation for yarn things. i made my james a blanket 3 years ago and he liked it. he's a sentimental guy anyway. i've also been struggling for an idea of something useful to make him that he'd like. my first choice would be a meal but that's impossible right now.
so, back to my friend joe. i've known him for a little over 5 years now. we're pen pals, have never met but he's nice to talk to. i can talk bathroom humor with him and he doesn't mind. a lot of people like to act like they don't go poo or it's just an absurd topic of conversation. no matter how different our lives are, we both take shits.
i thought i'd make him a bear. the only other stuffed animal that i've made was a dog and i don't think it turned out right. i've never made a bear or really looked at a bear pattern. here is what i came up with: 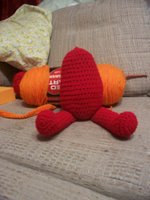 i got as far as the legs. i decided to make the head first. i wanted it to be a big headed bear but it didn't work out that way. i should have made the body first. (notice the orange in the back ground. i'm hoping to have a halloween set done soon. the scarf is on it's way)
i think it was the color that made me lose interest. red is joes favorite color. it's my least favorite. so i found myself unable to stay put while working with it. i'm still going to use the red but i will do something a bit smaller and quicker.
to make a long story short- because i'm tired and would like to lay down, i frogged it all and decided to make a bear that i found on crochetville.


i'm hoping to have it in the mail by next week- 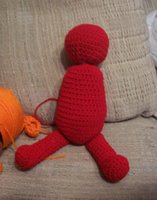 about a month after his b-day. it's all good thought because he knows what the deal is with the fundage.


and there is is with the head. i guess it would have been okay. the arms were hard to figure out. i was having the most trouble with the tops of the arms, would i attach them like the legs or made the tops round and connect it some other way?
i have too much on my plate right now to figure it out.


dominic got the curious george movie for his b-day. i'd like to watch it but he loves to act movies out. so he's bouncing around the room. either way, my head is hitting the pillow.
at 11:40 PM 1 comment: Links to this post

oh angel, where are you?

i signed up for an angel swap in CTB about a month ago. we got our partners last week and have until thanks giving to get our package to them. well, it's supposed to be there by thanks giving.
i saw and fell in love with a little book on ebay. clothespin angels! they're so cute. so, i got the book yesterday. my payment through paypal was hung up for a bit there for some reason. i won nit a week ago.
anyway. i've been debating, spoon angels or clotehspin angels. i'm in a worse posistion than i was in before the book! then i only had one option. i got spoons and little wooden craft balls and i have yet to find wookden clothespins anywhere. i'm going to try michaels when i go out again. the lady who i bought the book from sent me 10 free clothespins. so that's a good thing. this book is larger than i expected it to be. it only has a bout 5 pages but it's nice. in better condition than i was expecting to. visit the store where i won it on ebay.
i couldn't wait to try this out so i made the lower blue one. the trim on the dress is so cute but i always have problems with the sleeves. i just can't seem to get the chain spaces count right. one was bigger than the other and i was like oh no, i can't send this.
so now i'm going back to giving the spoon angels a try. i'm hoping to have another one ready by tonight.
----------------------
if you haven't heard, my little brother plays for the varsity football team now so w0ot w0ot!
he has a game tonight. - which reminds me, i need to charge the batteries for the camera. hopefully we'll go. it's been nippy out and i'm not wanting dominic to get sick. i've been planning on making him a little beanie. i'm going to do that after i'm done here. i wanted to make him a camoflauge one but it doesn't look too good on him so i'm going to dig throught the stash and see what other colors i have. he looks good in blue so maybe i'll go there. for some reason, when i tried to make him one last night it came out to be adult sized and flat on the top. i think it has to do with how many stitches i start out with. i'm going to try to stay away from multiples of 5 because it turns into a pentagon.
and here's my little button sleeping with Twinkie.