I've been hopping around the idea of starting a new craft. first i thought i wanted to do wire work, but i had none on hand and didn't know when i'd be able to get to the craft store to get some. after researching which kind of metals were the best as far as hypo allergenic stuff goes (if there is a such thing) i've decided to go with half hard sterling silver.
i'm not sure where i'll get this from, or how much it'll cost, but i'd love to start making earwires. 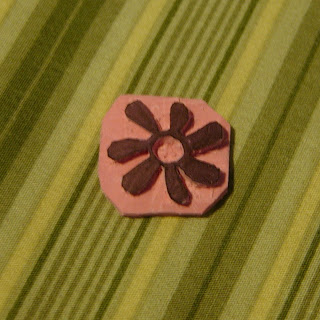 erasers are cheaper, and i already have an x-acto knife, so- the first new thing i'm trying is stamps. this is my first one and it's rather rough, i know but its still mine and i love it!

I'd like to be able to create simple stamps with "LC' on them so i can Lanee's Crochet some stuff up!

if i can find my 40% off coupon to Michaels, i'm going to get a full x-acto knife set. I've read that i'll also need some tracing paper. i just can't wait until i master this!
it will be awesome.
=-)
at 7:44 PM