With a little help from my brother, this little booger came out last night. 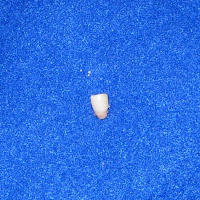 it was flappin on the edge and just ready to come out, but with dominic refusing, it kinda just chilled there for a few days.

after mounds of screaming and a little bleeving, dominic is now happy with his holey smile. he loves that he tongue can be seen through his teeth, lol. 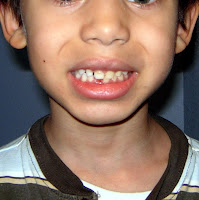 it seems that this whole big boy thing is coming in a wave.
for the longest time, he's refused to pick up a writing utensil and actually try writing or coloring, but while he thought i was asleep (i was really peeking), he picked up an orange crayon and one of his "big coloring books" and began whizzing though the mazes and 'which one of these things is not like the other' puzzles. he put the book back where it was and hid the colors as if he hadn't touched it, but i SO saw it. lol

i'm hoping that his first tae kwon do lesson, which is tomorrow, will go off without a hitch and that he'll LOVE it.
maybe he'll develop a respect and love for the art =|

so.
back to the tooth...
he believes that the tooth fairy collects the teeth and uses them to make tooth castels (he got that from Arthur, i think). when i reminded him to put his tooth uunder his pillow, he replied, 'oh, that's ok, i don't want to mess up the castle with my bloody tooth. i'll just wait for the other one to fall out and leave that one for her'.

so- technically, this gets me off the hook for leaving money under his pillow, but i kinda really want to, even though i know it'll lead to his asking to go to the video game store to buy a game with it (it won't be THAT much, but he'll still ask).