I tend to want to do stamps in the wee hours of the morning, when my brain is either needing to be sleeping, or just waking up.
my kid's not buzzing around and i'm able to listen to my radio on pandora in peace- with out random outbursts or informative shouts of being thirsty.

i had decided to stick to nature things because they seemed to be the easiest- and least perfect things to carve, they're so open to interpretation, i thought, great! that's me all over again, lol.

Michelle called my flower rustic, i called it flawed- we'll stick with rustic =-) 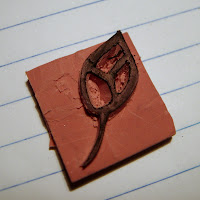 A leaf was my next attempt at nature. Embracing my rustictivity, i thought that creating bold lines in it would make it look cool, and it did.
it wasn't until i actually stamped something that i noticed the flaw. (it's SO a flaw. lol)
the stem is a bit off, which may be ok for some, but i think it gives it a whizzing football look, so i'll pass on this one too.

I'm going to keep it to look back on in the future- cause i'm so sure that i'll master this craft. lol

I don't know what i was thinking when i decided to give up on nature and get straight to my point- a yarn ball! 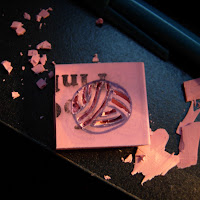 it was going so nicely too, i was very pleased with the way things were turning out for this one. while i'd like to eventually get to a more dainty ball, once again, i'm embracing the rustic and so, the strong lines are ok... were ok.. 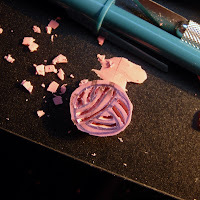 until i decided to notch the ball out and wound up cutting too car and into some of the lines!
after some sper glue, the thing is fine, but after stamping- i realized that i had just created a volley ball, and well- that just won't do. =-\

I made these things a while ago, but my frustration caused me to just slide them under my keyboard and forget about them.

Bryan of BryanKite on Artfire (the guy with the giclees) suggested that i invest in some linoleum and what not. and that's not a bad idea.

I think that stamp making would be a great way to express some creativity, with out having to be a pro. it seems like a good place to start and grow- simple designs could sky rocket.

So, after more yarn- maybe before, cause i think i have enough of that stuff to work with, the linoleum is on my wish list.
thanks for the tip, Bryan
♥
at 5:00 AM