i'm feeling: productive and cheerful.
i've got a little while before my little avatar wake up.
last night, domnic went around telling us that he's an avatar. that's his favorite cartoon and he often goes around throwing imaginary water, fire or earth at you.
i've been in a better mood thanks to the kindness of my brother and a walk on saturday. it felt good and i'm wanting to take another one today. i can't wait until the summer. summer mens long walks and iced tea for us. not to forget park days! we spent about 2 days a week at the park last summer. that is, until i saw more than one bee up there. bees are scary creatures.
my brother thought he got stung by a bee while at work last week. it wasn't a bee for sure because he said that it flew away. he drives the city bus and had to drive around with a pain in his back for hours. so, when he came over after work to have me get the stinger out, all i saw was a tiny bump. what ever i got out wasn't a stinger but he said it felt better after ti was removed. i told him that bees don't sting you and then buzz around for a few minutes until they see an open window. or at least that's what i've heard.
i finally got my aunt's winter hat done last night along with the baby set i was working on for i don't know how long. after that baby sitting episode, i was drained and not very productive.
the hat came out a bit small. i tried it on and wanted to pass out! but my aunt assures me that it will stretch. Ok, well, at least its out of the way. i'm about to start another hat. one for my mom. she had asked me a while ago but i made her slippers instead. they're so much quicker and there's no need to keep track of rounds.
so, i mentioned that i finished the set last night. it's blocked, folded and ready to be shipped. i was hoping to have it in the mail today, but my aunt wanted to add a few things to the box. she had bought the cutest little picture frame a while back ago. when she went to go get it, she saw that it was broken. the glue that kept the back piece on had quit. and wouldn't you know that when it's time for me to use a glue gun, i have no glue sticks. that's the hold up right now.
speakng of glue, i haven't seen my aleen's, starch, or other glue gun since i finished up some angels before christmas. what gives! we've got a swiper on the loose here, i guess.
and now, for the glorious set! 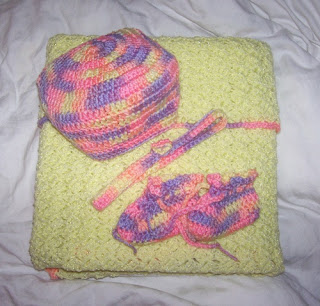 Tada!
Thats about 10 skeins of jamie and the little bit of kitten that i had left. included in the set is a blanket, larger than a receiving, but a bit smaller than a crib sized comforter, a hat, it's not square, i just had to prop it up a bit, a pair of booties, and a head band with a little flower on it. i hear that little Destiny has lots of hair so i threw the band in there just in case her mom wanted to show off the hair while keeping her in the set.
i'm so proud of how this set came out. it seems to have taken forever but it was well worth it. it's kind of inspiring me to make another. i can't wait until my cousin gets it. i'm sure she'll be surprised. i also threw in a pair of slippers for her done in valentinesy colors. she doesn't know about those. i hope she likes them.


i'm trying to get back to putting things in my etsy shop. i'm going to keep with my larger personal projects and crochet small kitchen and other things while i work. hopefully this will make me a bit more productive on both ends. a coaster might be a nice little break from that scary ole mother's day afghan that has yet to be picked up.
speaking of mothers, i'm going to go to the mall either later on today or tomorrow to pick her up something for valentines day. she's a plant person so i was going to go to the flower shop and pick her up one of those but i think a new out fit would be more useful. the lady never shops for herself. i can't remember the last time she went shopping and got more than a pack of socks for herself.

well, back to my little side crochet i go.
happy crocheting!
at 1:54 PM 5 comments: Links to this post

So, a while back ago, i was tagged. i'm finally getting around yo responding but like Mo, all in my little circle of friends have been tagged. i think i've found a good reason to start reading more blogs and getting in touch with more people, eh?

THE RULES: Each player of this game starts with the 6 weird things about you. People who get tagged need to write a blog of their own 6 weird things as well as state this rule clearly. In the end, you need to choose 6 people to be tagged and list their names. Don’t forget to leave a comment that says you are tagged in their comments and tell them to read your blog.


#1. I have really sensitive ears. I can't stand loud music or sounds. In fact, hearing anything loud usually puts me in an automatic bitch mode.

#2. Keeping with the hearing, i may be the deepest sleeper and the hardest person to wake up before noon, but if some one's talking loud or has something on and i can hear it (like a t.v or radio, or even a phone conversation), i get upset! and wake up just long enough to let people know it.

#3.I am a stickler about people washing their hands before they enter the kitchen or try to touch anything in it. When some one comes over and opens up the fridge with out having made a stop at the sink or bathroom, i cringe and come right up behind them with the lysol. i don't want to be eating steering wheel, door knob, or butt crack along with my chicken enchiladas, thank you!

#4.I love to cook and bake and be all domestic, but i absolutely hate doing the dishes. people who are totally capable of cleaning up behind themselves but don't urk me. wash your own plate!

#5. I only do my personal laundry about once a month. If it passes the smell and spot test, it's still clean. ( i rarely go out anyway).

#6. Dominic can never wear anything twice with out it being washed first. he's a boy and is sure to sit in something or dip his shirt in his soup. plus, he gets bumpy easily so 2 day clothes equals a 1 week rash for him.

like i said before, i've got no friends! so the train stops here for me.
at 4:45 PM No comments: Links to this post