A few caps and Featherstone.

Last week, I was asked about making a cap or two. Now, I know that that's wouldn't be anything too exciting to most, but the request came from a lady who had bought from me before- yep, my second [tentative] repeat customer.

She brought to my attention the fact that I didn't have much to choose from when it came to kids hats and such, so, I came up with a few for her, and a couple extra for my studio. 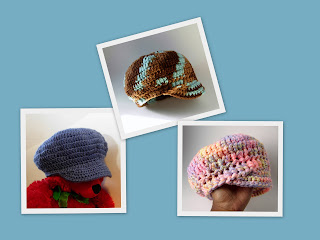 The fact that i have a 5 year old running around totally slipped my mind- I hecka should be taking advantage of my little model while i can still get him to stand still with out a bribe!
I've got a pink camo one (for a 1-4 yr old) in the works that will be listed tomorrow as well.
Yay for actually making stuff! lol
________________________

I've actually picked up and started reading a new book, called Featherstone, too. So far, the way the sentences are structured seems a little odd to me- for example, the first character to be introduced, Sonny, is talking or thinking about having seen a figure, having to look up towards the sun at it-

"Only the sun, printing gold into black into gold against his eyes, only a dark shape against the sky, like a dear shape cut clean out of the light and laid against it..."

but i'm hoping that reading the story will be worth it, and that i'll soon get used to reading in it's strange to me dialect. (Even though a few who have reviewed it on amazon have complained about the beaten to a pulp usage of prose).

I'm looking at this one in an optimistic way- if i am ever to write my own story, which i hope will be read and read, i guess i've got to see how to NOT do it, too.

If this one doesn't work out, i'll be on to the next and won't feel like my time was so wasted- as it was on that Blond Roots garbage because I have been making hats =-P
at 10:41 PM