recently enough, some one asked me if i've ever felted anything.
i had not.
and they paid me many compliments on my work and suggested that i try it.
so, i will!
but, pure wool is so damned expensive, that i've avoided it, and put the thought of every having enough to do anything with out of my head.
until i went to walmart and found some marked down to $2.50, so i got 2 balls.
yeah, only two balls, what was i thinking!!

i can't wait to make something with it. i'm not so adventurous as to make a hat or anything other than a scarf with it, so perhaps a purse or pouch at first.
i've done a test swatch and it shrunk some, but not much, and i love the way it looks.
it looks so yummy i just wanna bite it!! 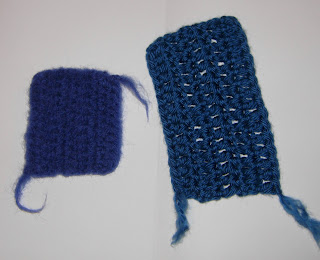 The other yarn is caron simply soft eco.
i was worried about it pilling, because the yarn started to look odd after i was frogging a gauge swatch. the single strand of yarn was pilling!
so, i made a little block and threw it in the washer with the wool, with hot water, and dried it as you do.
it didn't pill, perhaps because it was only 1 wash, but it is a little fuzzier than the regular caron would be even after a couple of washes. i'm going ot over look it and still make my jacket using the caron eco and just call the fuzziness cozy.
at 5:54 PM