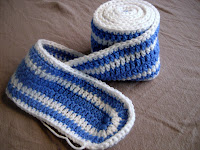 ok ok, so it's not 100% done, but it's in the bin of things to be finished. i've still got some pretty good sized skeins left after making this one, so i may be able to do more than 4 before january. i'm planning on putting some pom poms on the front bottoms of these, but i'm not sure... i don't want it to be way bulky, but i do think they'd look nice.

i have been being quite productive. curlin up on the couch and watching....
the SCI FI channel!!!
i've been bitten i guess. there's something about larger than life, eating humans alive sized rats that makes a gal's hook fly.
not to mention the hotties on stargate atlantis! 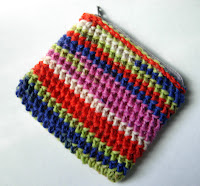 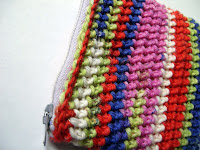 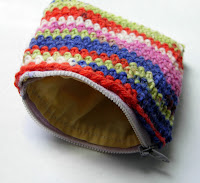 I did finish the zippered coin purse last week or so. i've given it to my mom. she's asked me to make more for her to give as christmas gifts at work. i should get on that because those holidays tend to sneak and bite!


i had a little trouble with the zipper. i don't remember having put in one before this. or at least i didn't when it came time to sit at the machine. i was having porblems with the fabric getting caught in the zipper. i think i sewed it in upside down or backwards, maybe on the wrong side or something.
it's ok, cause, well, this is only a test! 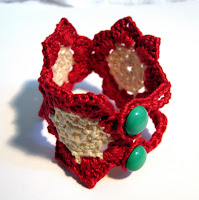 Did i tell you all about a Christmas in july contest that i entered into in a crochet group i'm a member of? this cuff isn't my own pattern, but it did win me first prize. way cool! 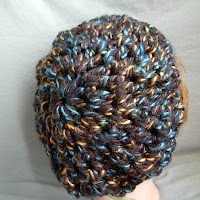 out of this came that..
i know i've been a really bad girl, but i had to do it. i got each of these yarns at bargain prices.
so far, i've made that hat and a couple of pairs of arm wamrers out of the fuzzy pink. next i plan to do a purse out of the silver.
the only thing with purses is that i don't have the fabric on hand to finish them, and the only store near me that has fabric is way out of my budget. so, i've got a pile of purses waiting to be done.
maybe i'll hold off on the silver one until i get at least one of the others completed.