I've been the opposite of motivated lately.
So, in an effort to pick things up a bit, i've decided to require that i work on, or make at least one something crocheted and list at least 1 new thing a day.
I started on this scarf yesterday: 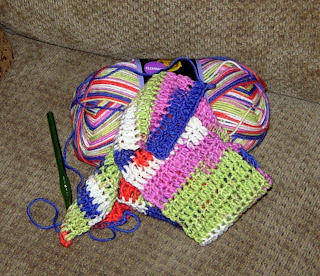 It's made of wool!
which i think i'm either sensitive or allergic to, but it's all good, hopefully if i don't let it touch anything but my hands, i'll be alright.
hmm...that makes me wonder ifi ever had anything of my own made of wool before
i'm hoping to have this thing done by tomorrow at the latest. it's going to a long skinny scarf. it's not that thick, maybe light sweater thick and only about 3 inches wide.

I'm using sock yarn because it's light and would be perfect for when it's just starting to get nippy-you could just wrap it once or, for when it's actually cold, just wrap it more and be warmer!, and the colors are bright.
at 6:44 AM