i'm feeling a bit better now. physically anyway. my brother thought it was a good idea to spend last weekend with his friend who was sick ( i mean sick sick). he was feeling alright when he went to school the next day but i guess it all started coming up when he got there. right after i got the call from the school that he needed to be picked up, i began feeling not too hot myself. luckily, dominic slept through it. times seems to be dragging now, though.
i did get some crocheting done last night which is (WHOOO HOOOO!). after going around in circles with my hook in yarn- not hat circles but frog circles. lately, nothing seems to be getting started well enough for me to continue on with it.
it seems like the baby blankets are working out an not up. the more and more i work on them, the wider, not longer, they seem to get. i've got it to where i'm doing a few rows a day now in hopes that it will beat the baby here. the next one is due in june so i better start like yesterday on the one for her or it will never get done.
i pulled out the bin that was holding a couple of WIP's. one was a rug that is so far past i'm not messing with it that it's not even funny. and the other is my mom's mother's day afghan from last year. i did manage to produce a pair of pink and black slippers for her but the ' when are you going to work on my blanket?' has already began again. i've decided that after i list the second pair of slippers, i'm going to take some time off from producing items for etsy so i can get finished with more personal things. dominic still needs a pair of slippers ( i doubt he'll wear them, though). the kid hates house shoes and often walks around with only one sock on. i had made him some out of some chunky USA that i had - not sure where they went but he did not dig them at all. i'm getting tired of having to wash blackened socks so he'll have to learn to deal with having something on his feet until summer.
back to that dang blasted rug- i was using a yarn called cabana print that i had picked up a year or so ago. (it feels like that long) i started on an afghan with a yarn by the same name but wasn't wise enough to make sure that i had enough of it to complete the project. when i went back to get more, it was hard to find and when i did find it, it was SO off from what i already had that i just gave up on the afghan (which had richer, darker colors). i'll frog it when i get a winder, until then, it's tucked away in shame.
here are the slippers that i made (on sale here) from the "rug's yarn". 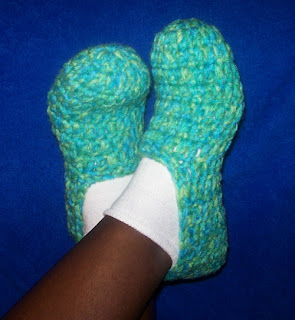 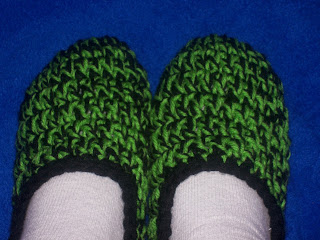 i finished my mom's scarf a week ago. she has yet to wear it. i have so many folks who nag me to make them stuff and then never wear it. perhaps they're saving them for the day i become famous. here it is with out the fringe. for some reason, my mom loves pink. she wanted me to maker her a hat out of this stuff at first but it was not happening. it just didn't look right. i'm sure it would have winded up on the 'oh hell naw' website. 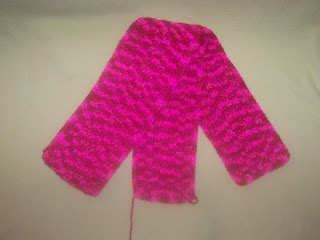 oh look, a picture of the hat! a long time ago, i made a scarf for a little girl out of this yarn. after that, i only had a little bit of it left but i tried to stretch it into a poncho. didn't work. so, the baby girl opportunities that have come up have got me wanting to get rid of the stuff. i have just enough to make this hat and a pair of booties for sure, maybe some mitts if i'm good. i wasn't able to picture how small a baby's head would be or how it would look on one at all. i wanted it to be a mini beret/mushroom styled hat - we'll see. after i got to working on it, i was feeling like maybe the colors were too loud for a newborn but people keep telling me 'no, it's cute!' this will be a later on down the line gift, i think. 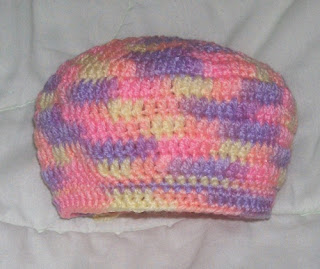 did i tell you that dominic cut his hair? he's such an i don't know what to call it at times. he not too long ago said to me -'im going to the potty' i was like, ok, good. he said 'well, are you coming?' i was like, what!? he still fears the dark even though my mom got him a little finding nemo foot stool which allows him to reach such things as lights and sinks. i've got to break that kid from using the buddy system when going to the potty.
privacy isn't a big deal for me so i guess it's rubbed off on him. i just think - what am i going to do when he's off to school next year.
can you see the damage? there used to be 3 very spingy locks of hair there. i'm going to have to hold him down to get him to be still long enough for it to be fixed. some say leave it alone but i think this was a cry for some attention so why not give it to him? it'll grow back. hopefully by then he'll be out of the i can cut my own hair stage. 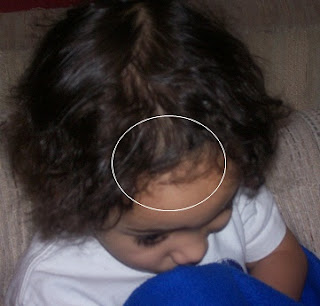