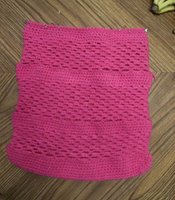 i've been crocheting a lot lately but coming up with nothing. i wanted to make some hats for a few guys i know but i've not been able to come up with a pattern that would look right. i'm not too good at making hats -i think-. i can't get past the 6th round with out thinking that they look funny or that they'll be too big. they always look jagged at that point so i wind up frogging them. i've only made a couple of hats that looked rounded when laid flat and i think that may have been because of the yarn. i know it has something to do with how many stitches i start out with or the hook i'm using. i found a pattern online today that i was going to use for inspiration. it was a regular ole DC hat pattern. i guess i didn't need it because i know how to increase in rounds but i liked the security of knowing that i was following a pattern. well, it didn't work out too well. it still looked square to me so i frogged that too.
i've got my angels nearly done for the swap. all i need to do is jazz up their necks. i was looking for some pre-tied satin bows but got lost in teh world of michael's. and wally world doesn't cary them. and can you belive that they only carry paper roses? i guess that would do. i'll have to see about it when i'm there next. not much variety, i tell ya that. but, hey, what do i expect, it's walmart. so, i'm hoping to have the package sent off by the end of this week, which is coming faster than i thought it would. if not by saturday, definitely by monday.
i've been trying to put more things in my etsy shop, trying not to give up on it. i guess i haven't been networking like i should so i'm going to try to do that more. i suck at making small things to list. i thought i'd do that just to save spaces for when i complete something big. i'm having the hardest time with that. i'm too picky for my own good. i made a bracelet that i was going to put on there but i didn't. instead, dominic ran around with it on for most of the night. i don't want to do the regular fingerlesss gloves because well, every one has them. i guess i will have to think of something.
my brother will be moving out soon and i'd like to make him a house warming gift. i know it will be a bit after he's all settled in because i don't want it to be just a set of coasters or something like that. perhaps i can make him something in his favorite color to remind him of home. he's such a work-o-holic that i doubt that he'll be spending much time there anyway.
i'm just determined to make a little something for joe. he sent me a b-day card around my birthday and that made me feel kinda special. like wow, some one's thinking of me! it's far after his b-day now so i'm hoping that i'll be able to drop a little something in the mail for him sometime soon. men are the hardest to crochet for, i tell ya! i figured that i'd make him something to sit on his dresser or in his closet. i may wind up making something bigger than the chi- little dog that i had planned. i suck at making animals or stuffed things. i'm alright with working in tight rounds - it's the assembly that gets me. the limbs never look right to me. i might be using the wrong kind of needle or something. (of course it's not just me).
i finally made my mom a carry all bag and she's carrying all in it. i wanted it to be strong enough to carry her big what i call doggie bottle of water in without it stretching out of shape. i put bands of single crochets between the mesh to prevent it from over stretching. i don't know why they're rippled, perhaps i increased some where along the way. i'm trying to think of a way to fix this problem, i'll let ya know! here it is with out the straps.

i was going to get a whole mess of white cotton and just dye it to her favorite color, which is pink but a really generous friend picked some up for me while she was out. (THANKS!!) i still have a ball left over. my mom has asked me for a cup cozy so maybe i'll use some of that to accommodate her request =-)
man, it's fricken breezy out. earlier, it was hotter than the middle of july in here, or so it seemed. we had windows open and fans blowing but that didn't help. now it's freeeeezing! the wind blew my window stuck and now i can't close it. i need to clean that track out.
at 2:07 AM