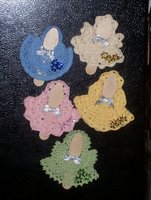 so, i signed up for an angel exchange months ago - or at least it feels that way. we were to have our angels delivered to our partners by thanks giving. i was a bit worred about getting mine out on time so i got started early. i've been wanting to share what i was sending but i didn't want my partner to see. (just in case she ever comes this way) so, here they are. that's a lot of thread for a yarnie! i was fretting over the bows for a while. i finally decided, after a trip to walmart which was fruitless, to use what i had. i like the way they turned out. my partner said she liked them and her grand-daughter liked them so, yay for spoon angels!

here's what i got: 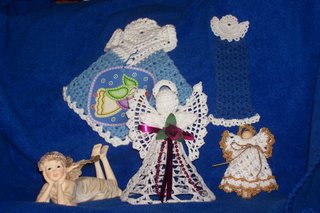 this picture isn't really doin justice but i got some really nice angels. i'm happy! can't wait to bust out the christmas stuff and blend these in with them. my favorite it is the clothespin angel. i came across the pattern on the web and passed it up- i'm glad my partner decided to use it, it's my favorite one of the bunch. 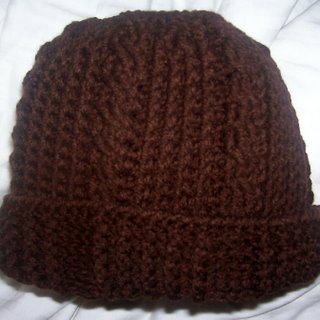 i finished the manly hat finally. i should have guessed when i was about half way done with it that it would be too small for my friend. it's tight on my own head, which is about 21'' around. i used the largest hook called for on the patter and still came out tight. perhaps i take out my tensions on my crochetings or something because i'm finding that my gauge is not the same as it used to be. i'm looking for a solid L and M hook. i have an N and a P but those are way too large. i found a hook that was a bit larger than a US K on ebay but it came in a set and had to come from where ever pounds are used as currency. so, shipping equaled the cost. i didn't get them. i might have to break down ad go for the ole crystallites or treat myself to a wooden one. i was wanting a metal one because i like the weight on them. it seems that it gives me leverage when getting a groove going on when crocheting. (you know the groove i'm talkin about- on a roll and going quick).
so, maybe some slippers or other warmer type things.
oh snap, matlock's on, gotta go!
at 2:45 AM