but oddly enough, i can't remember how it started. the middle was an emotional roller coaster, though.
after giving me about a weeks notice, my son's father came home on leave from iraq. the same week that he was here, i got a job- i had been feeling way motivated the week before, and not too soon before he left, i was rejected by it. (the job).
because i did not have an inch and a half worth of hair, i could not drug test, and so, no job.
it is absolutely ironic that the thing that kept me from getting a job that time was a frickin drug test! because 1. nisha doesn't do drugs, and 2. NISHA DOESN'T DO DRUGS!
but, after that, i was kinda wishing i hadda. years of going down the straight and narrow, only to be turned down by a retail job. g.r.e.a.t - great.
there was a swap going on in CFL that i had signed up for, but with all that going on; running around thinkign i was gettign a job, while trying to get things taken care of with the ex, working on my swap got put on the back burner. thankfully, the get it in the mail time was pushed back by a couple of days, so i had time to finish it and get it out by the dead line.
i already had in mind what i wanted to make, which was a shawl, and i had the yarn that was just right for it.
the theme of the swap was 'fall', so i used a couple of skeins of red heart's fall. clever, i know.
i didn't get a picture of it, because my camera was just not having it, but, i did get a new camera yesterday! w0ot!
here is a link to my partner's blog with a photo of the shawl.
i love what i got in exchange, which was this: 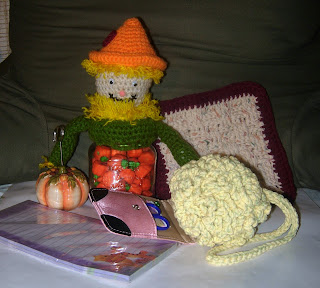 A jar of pumpkin candy topped with a scarecrow. my favorite part of him is the collar, a pumpkin card holder, a travel sewing kit, winnie the pooh notepad, a hotpad? and a shower thingie, which is my favorite! i've been wanting to use it, but i don't want to mess it up cause it's so cute!

thanks Sandy, i love my fall exchange package!
at 4:56 PM